Her serious expression makes her face look strict , but illuminated by her smile, it reveals sensitivity and softness.

Elizabeth Pitcairn radiates tenderness and femininity at the same time combined with the strong hand and nature of virtuoso performer. Her name is on the list of the 100 most famous violinists in the world, where she holds the 34th honorary position. One of the most acclaimed soloist in America, Elizabeth is in Bulgaria at the invitation of “Cantus Firmus” and the “America for Bulgaria” Foundation – organizers of the cycle “Music of America”. For several years now the cycle has successfully presented to the Bulgarian concert scene works and musicians from the New World.

On stage she has a palpable presence as a soloist with the sense of romanticism, a musician who communicates with the instrument on a really deep level, while great teams with the orchestra, although only after a few rehearsals.

The program includes the Concerto No. 1 for Violin and Orchestra by Max Bruch, which Elizabeth says is one of the works she’s been performing since she was 12 and has performed many times on stage. This is one of her father’s favorite concertos and together with Beethoven’s Concerto for Violin and Orchestra will be included in the disc which is going to be recorded by Elizabeth with the Orchestra of Classic FM Radio under the baton of Maxim Eshkenazy.

“Dad was in tears when he realized that this concert will be included in the disc. He is the man who always supported me. Thanks to him, I was brought up with confidence that everything was possible. ”

Raised in a family of musicians, where music was a way of life, Elizabeth began playing at the age of three under the guidance of her mother, who taught cello and imposed strict discipline as a teacher and parent.

“I owe everything I am to my mother, who with extreme perseverance taught me and guided me musically. Of course, I did not like to practice as a kid, but inside I knew she had the right to insist on that. She devoted much time to this and in fact she has an impact on each note played by me. She played the piano with me and if I was absent minded or unwilling to practice, she used to send me into a corner until I was ready to start playing again.

My brother and I used to have piano lessons and my mother took us to her cello lessons. Every Sunday we traveled an hour and a half for the church service and in the car we were listening to classical works.”

The musical piece that inspired her as a child was the Jean Sibelius Concerto for violin and orchestra and while listening to it, she used to dream that it was her performing the violin part on stage. Since then, Elizabeth was confident that she would be a concert solo artist and had a premonition of an extraordinary destiny. In her last year of college, she received an exclusive gift – a unique Stradivarius won at an auction.

Known as the “Red Violin” the instrument of Elizabeth has a long history that is lost back in time. Made by the legendary Antonio Stradivari in the early 18th century, it has changed many owners and inspired the director François Girard to make the movie “The Red Violin” that mixes facts and fiction.

According to the story in the film, the violin embodied the spirit of the wife of Niccolo Busoni – a violin maker. Its sound is divine and enchants anyone who touches it. Its red color in the film version is due to specifically prepared by the master lacquer mixed with drops of blood of his beloved.

One of the most famous holders of the instrument before it ends up in the collection of a wealthy New York businessman and hence the famous auction is Lilli von Mendelssohn, heir of a noble German family, now it belongs to the temperamental Elizabeth.

Elizabeth believes in destiny and considers that her meeting with this tool is not accidental. By a representative of the family, which bid in the auction, she managed to win the instrument. The amount of 2 million was actually a gift from the grandfather of Elizabeth, who at this time was sixteen, in her last year at university.

“Coincidentally, or not, the auction took place on Thanksgiving and always on this day, I express my gratitude for all the opportunities I have.

“With the first touch and the sounds on this instrument, I felt a special lightness. People were talking around, commenting, and I was caught up in my own world, surrounded by the sound of this violin. Indeed, to some extent I believe it is fate. Another interesting coincidence is that I was born on 5th December – the date of the death of Wolfgang Amadeus Mozart. It is considered very powerful and probably there is a kind of continuity, and his music always inspires me and for me is a source of extremely vital energy. ”

Elizabeth says she is glad to be one of the performers to set the standard as a soloist on the world stage, although this is a real challenge.

“Today it is a real challenge to be a woman – artist. Besides the time you spend to play, you must take care to look good on stage. Sometimes I change several gowns for a concert and is important to be always in a good shape. Now I’m on a plant based diet, and I used to love ice cream. In my childhood it was the traditional prize after every concert. So for me, concerts and ice cream are connected by a thin red line. “- she smiles.

During the recordings and rehearsals in Bulgaria, Elizabeth tries to speak Bulgarian, encouraged by her Bulgarian colleagues. “Zapis, molia”/Recording, please/, “Blagodaria vi mnogo” /Thank you very much/ – she articulates the words carefully, smiling proudly. With the Orchestra of Classic FM Elizabeth managed to team extremely well.

“These are musicians with a specific sensitivity and worldview. I know other Bulgarian musicians with whom we studied together in America. Max and I met there 15 years ago. He immediately impressed me with his vigor and talent and we became friends since the beginning.

He actually brought me here and showed me some of the historical sights of the country – the Valley of Roses, Veliko Tarnovo. ”

The musicians of the Orchestra in turn are delighted by Elizabeth’s strictness, her responsiveness and attitude manifested. For example, she offered the orchestra to deliver for the upcoming recording of the second part of the double disc special Wittner Finetune Pegs, which will significantly facilitate and precise the tuning of their string instruments.

They also share that Elizabeth is not separated from her violin and this is not only because of its high price. And although she has thousand times told the story of this unique instrument, she tends to share some time to anyone who is interested in the details.

Elizabeth feels responsible to the young musicians and during her tours takes time for giving master classes to encourage and teach them.

Elizabeth is President, and Artistic Director of the Luzerne Music Center Festival in upstate New York. This is an international summer music school for youngsters between 9 and 18 years. An educational program which gives young people the opportunity to play with professional musicians, while training is combined with sports in the nature. She trained there as a teenager, and considers that this is an invaluable experience and a major step in the musical education of a young musician. “I would love to see young people from Bulgaria in the summer session.” – She notes.

The Centre was established in 1980 and this year celebrates its 35th anniversary. The session will be held from June 21 to August 15, by offering special scholarships. More information about the concerts and educational program can be found on the website of the event www.luzernemusic.org

One of the things that Elizabeth likes is that her lifestyle gives her the opportunity to travel around the world. She feels the different atmosphere of the places she visits. Hawaii has a special spirit that she feels inspired by, and in Bulgaria she is looking forward to visit the Bulgarian Black Sea coast. This is planned for her next visit in May, when the “red violin” will sound again on our territory for the recording of the second part of the CD with the Orchestra of Classic FM.

Article by Violina Tosheva, Based on the interview with Elizabeth Pitcairn 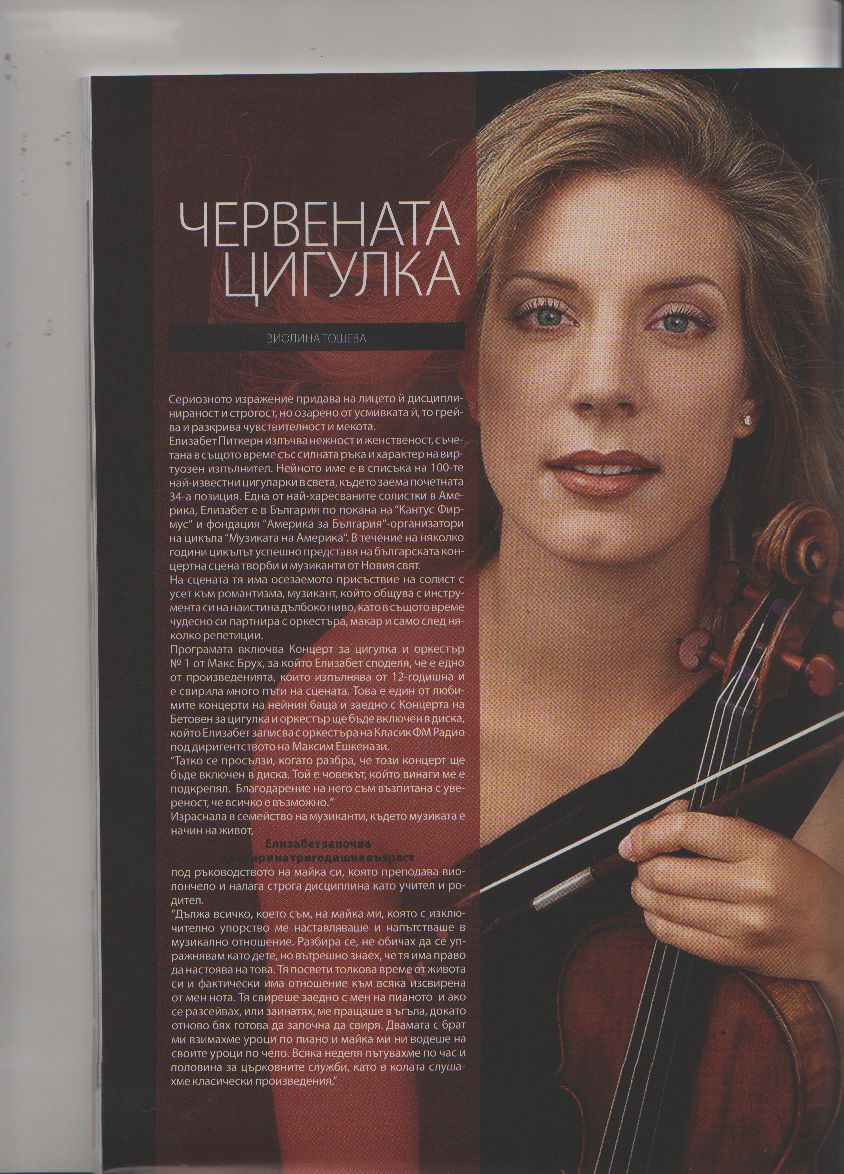 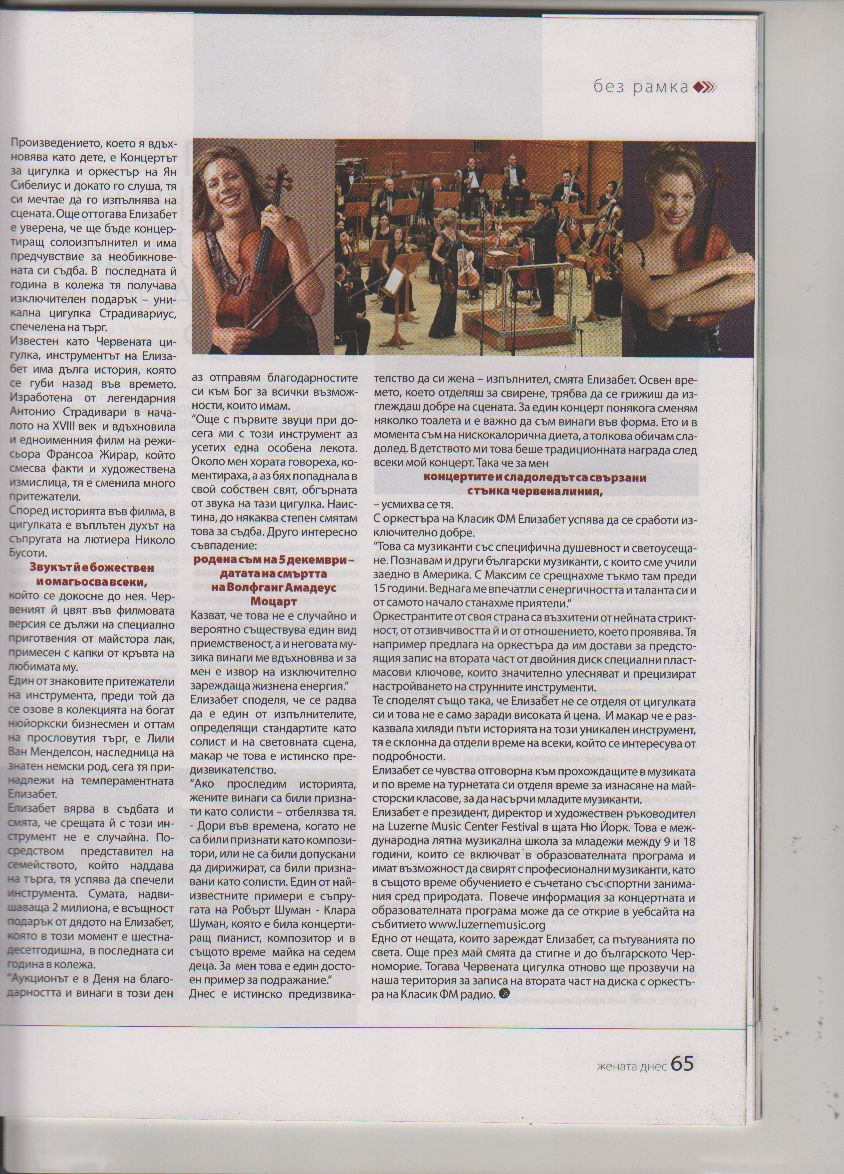