History of the "Red Mendelssohn" Stradivarius

Celebrated violin virtuoso Elizabeth Pitcairn performs in partnership with the legendary 1720 Red Mendelssohn Stradivarius, the 1990 Christie’s auction of which is said to have inspired the 1999 Academy Award-winning film, “The Red Violin.”

The historic violin was crafted in 1720 by Antonio Stradivari, who lovingly made his instruments in his small shop in Cremona, Italy centuries ago, and remains the most famous violin maker of all time. Not long after its creation, the instrument appeared to vanish; no one knows where or to whom the violin belonged for more than 200 years, spawning any number of historians, writers, journalists, critics as well as Canadian filmmaker, Francois Girard, to speculate on the violin’s mysterious history. Girard’s imaginative speculations became the narrative for his beloved film, “The Red Violin.”

Known as the Red Stradivarius and owned by legendary violinist Joseph Joachim, the 1720 Red Mendelssohn Stradivarius would eventually surface in 1930s Berlin. It had been purchased by an heir to the great composer, Felix Mendelssohn. In 1956, it was purchased by a New York industrialist who kept the instrument in impeccable performance condition. Much of its original burnished red varnish remains on the violin today, and it is thought to be one of the best sounding and most beautiful of Stradivari’s remaining violins. Then on Thanksgiving Day in 1990, the instrument’s fate would once again be triggered when the industrialist opted to put the Red Stradivarius on the auction block anonymously at Christie’s of London. While some of the worlds’ most powerful sought to win the coveted instrument, it landed in the hands of then sixteen year old American solo violinist, Elizabeth Pitcairn. Pitcairn would remain silent about owning the violin until her rapidly burgeoning solo career brought her into the public eye on international concert stages after nearly three decades of rigorous training by the world’s most esteemed violin teachers.

Pitcairn would come to view the violin as her life’s most inspiring mentor and friend. Many have said that the violin has finally found its true soul mate in the gifted hands of the young violinist who is the first known solo artist to ever bring it to the great concert halls of the world, and who has made it her goal to share the violin’s magical beauty of sound with people of all ages, professions and cultures. Today, Pitcairn and the Red Mendelssohn Stradivarius violin continue to foster one of classical music’s most compelling partnerships.  – By Suzanne Marcus Fletcher

Lilli von Mendelssohn was born on November 30, 1897, in Berlin. She was the daughter of Franz and Marie von Mendelssohn. Franz, a banker and president of the Berlin Chamber of Commerce, was also the grandson of the great composer, Felix Mendelssohn. Lilli is pictured here holding the Red Mendelssohn Stradivarius of 1720. Formerly owned and played by Joseph Joachim in the late 1800’s, it was famously known as the Red Stradivarius.

Lilli married conductor, composer, Emil Bohnke in 1919. She was 22 and he 31. They had three children, the youngest, was famous pianist, Robert-Alexander Bohnke.

Lilli was brought up as a career violinist and there is evidence she also performed for high school students when she was 29. Her husband, Emil, composed numerous pieces mostly for piano, yet also included is his better known Violin Concerto in D major, Op. 11. (Last recorded in 2004, Prague Radio Symphony Orchestra, Koljia Lessing, violin, Israel Yinon, Conductor.) This concerto was composed in the late 1800’s as his were his other notable compositions, thus implying that Lilli herself, likely performed this piece (in private or otherwise).

Tragically, while looking for a summer home, on May 11, 1928, the lives of both Emil and Lilli Bohnke were taken in a car accident. Fortunately, they had left their children with their grandparents. The youngest was only a year old at the time. Emil was 39 and Lilli, 31.

The three Bohnke children spent the remainder of their younger years under the care of their grandparents, growing up in the von Mendelssohn mansion in Berlin. Later, during the beginning of WWII, the family fled to Austria due to Berlin being a prime bombing target. In regard to the compositions of Lilli’s husband, Emil, his final symphonic composition was debuted just six months after his death – in late 1928. His existing compositions were easily suppressed by the Nazis and it was left to his youngest son, Robert-Alexander, born 13 months before his parents’ death, to gradually rediscover them after the war, helped along in part by the urging of Edwin Fischer, who had often played Emil’s music.

Emil’s final compositions were the Piano Concerto, Op. 14 and Symphony, Op. 16. These pieces conveyed the doom-laden atmosphere, towering, nightmarish shadows, and creeping unease which was present at the time in between WWI and WWII. Robert-Alexander recorded the piece in 2001, just prior to his death in 2004. He was married twice and fathered five children.

Read the original articles from November, 1990 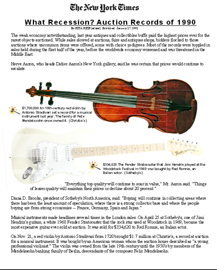 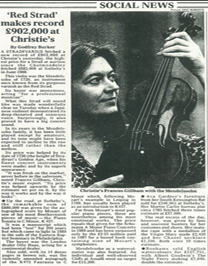 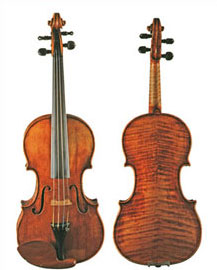 Detail of the 1720 Mendelssohn Stradivarius 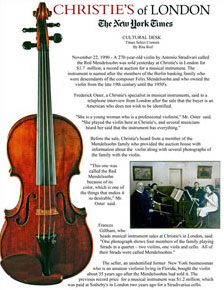 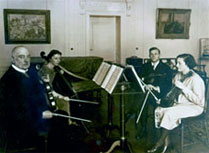